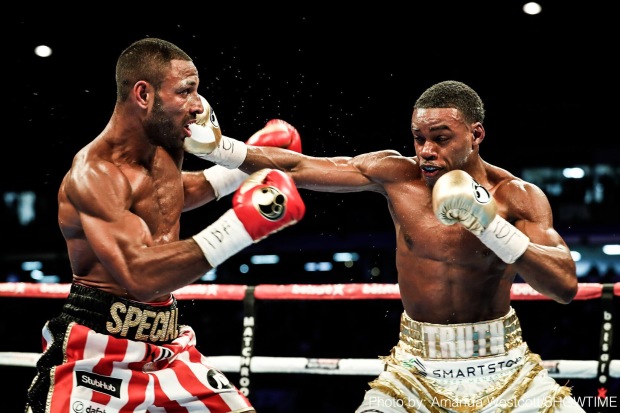 What a night of live boxing it was for the 27,000 in attendance at Bramall Lane Field in Shefield, England. The two matches shown on SHOWTIME were filled with fist flying action.

The main event was as predicted one of the best match ups of the year. Kell Brook faced his mandatory challenger with his IBF welterweight belt on the line. Errol Spence proved last night that he is a force to be reckoned with in the welterweight division. Spence claimed his victory in an 11th round TKO as Brook took the knee and could not continue. 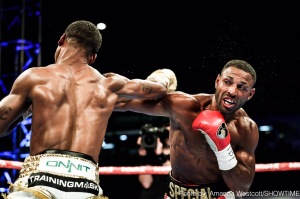 Kell Brook was definitely no walk in the park as he proved to even win several rounds and as predicted was Spence’s toughest test of his career. Brook made it a very hard fight with winning most rounds in the beginning. Spence never really letting off and kept swinging leather with body shots and jabs. The work Spence put in eventually hurt Kell Brook by the 7th round with swelling around his left eye. 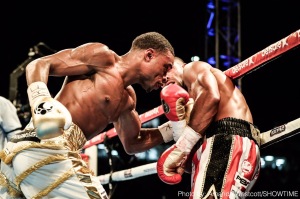 By the 10th round the hard hitting  American overwhelmed the English bruiser and dropped him to a knee. Kell was able to get up and took some more relentless punishment, but just when you thought Brook was done, he kept surprising everyone and rallied back and would’ve arguably won the round if it wasn’t for the knockdown. Errol showed no signs of slowing in the 11th and kept targeting his opponent’s left eye. Kell Brook would eventually take a knee and referee Howard Foster stopping the fight shortly there after.

Errol Spence has done what no American has done in a decade, strip a British fighter of a belt on English soil. Much speculation arose after the fight about Kell’s face injury. It was later confirmed that his left eye socket was broken. No word on whether he needs surgery or not.

In regular Keith Thurman fashion he had some choice words on Twitter:

Congrats EJ, but there is no true 👑 until you see me. #OneTime pic.twitter.com/oBbwowShGv

With Spence responding right away:

Errol “The Truth” Spence has proven he is among the best in the division. Keith Thurman, Shawn Porter, and Danny Garcia are among the top welterweights in the division and could be seeing Spence in the near future. Kell Brook Tweeted later that he would be back.

Thank you to all the fans for your support! What a great fight, gutted about the result congratulations to @ErrolSpenceJr #iWillBeBack 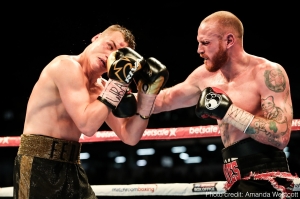 In the co-main event, George Groves (26-3, 19 KOs), impressed with his TKO over former middleweight Fedor Chudinov (14-2 10 KOs), and impressed his fellow countrymen/women in attendance. At first it seemed like non of Groves’ punches were affecting Chudinov, and the Russian did not let up with his offense as well. By the sixth Chudinov’s defense dwindled as he was getting hurt and possibly concussed as the ref stopped the fight and ruled it a TKO.