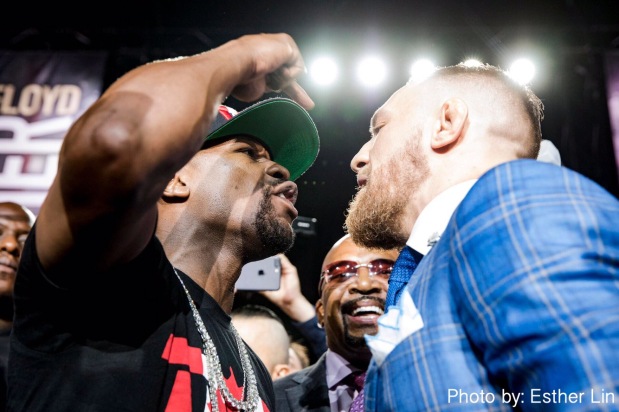 Man, after a heated battle of words at the Barclays Center in Brooklyn, New York I have to say, they keep upping the ante. Every stop of the trash talk tour is shadowing the previous one. We saw Connor McGregor walk in there with no shirt and a fur coat and even throwing F bombs to people in the crowd who opposed him. The Irishman even challenged those against him in the crowd to go on stage and shut him up.

Floyd Mayweather upped his game to making it rain on McGregor and calling him a stripper (which seemed to tick off the mixed martial artist). The two fighters have not laid one finger on each other but McGregor started bumping Mayweather while he was talking to the crowd. Floyd with some words summoned his entourage of goons to form a close barrier around Connor and his people blocking them from moving inches almost causing a brawl, so yes this press stop had more surprises than the previous stop including an embarrassing PSA from McGregor addressing the media reports saying he was a racist.

Who won the trash talk contest in round 3 of the press tour stop?