Last November we witnessed the battle for light heavyweight supremacy. Sergey Kovalev and Andre Ward faced each other in the ring to see who is the best in the division. The undefeated (at the time) fighters clashed in an exciting 12 round bout that had knockdowns and powerful punches that stunned. 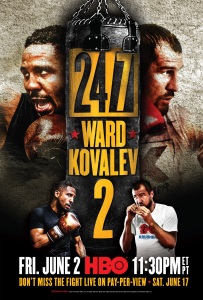 In a controversial decision favoring the gold medal winning Andre Ward, Kovalev was in complete disgust of the decision which he and many people watching thought was robbery. This only fueled the need, not want, but need for a rematch (which was a clause in the negotiations prior to making the deal). The Russian also believes that fighting in America with American judges worked in favor of Andre.

Everyone knows who won #KovalevWard. But if @andreward really thinks that he won the fight he should to approve it in the rematch👊🏼👊🏼👊🏼 pic.twitter.com/R6g7mTQT6s

After winning the bout, Andre had thought of retirement, which frustrated Kovalev and his camp because he would have no shot at a rematch which they were so desperate to make. After a couple months of back and fourth, both camps taking shots at each other, Ward had finally agreed to give Sergey his rematch. Ward had gone up in weight initially to challenge Kovalev for the bout last November.

I'm going to keep it short & sweet, you got what you asked for, now you have to see me JUNE 17. This time leave the excuses at home. #EARNED pic.twitter.com/rw5UCjKuwo

Ever since the deal had been done there has been a war of words between the two boxers. With Andre saying “No excuses this time” to Sergey saying “I’ve lost all respect for him.”

The animosity is real people, boxing matches with real bad blood have been some of the most entertaining throughout history.

With such a feud boiling between these two, there should have been more press, and more promotion. There was no Face Off with Max Kellerman due to Andre leaving Vegas right before the filming was supposed to take place. It seems as though the Oakland native is no fan of being in the spot light. He has been criticized throughout his career for not being able to promote himself the right way or not wanting to. Hey, some people just don’t like the fame too much and that’s fine.

I predict this fight will have multiple knockdowns and will not go the distance. Will Kovalev stop the fight from going to the judges? Or will Ward really convince everyone that he is the true light heavyweight champion?

We will find out on June 17 at The Mandalay Bay in Las Vegas.

Check out HBO Boxing’s 24/7 Ward/Kovalev 2 below